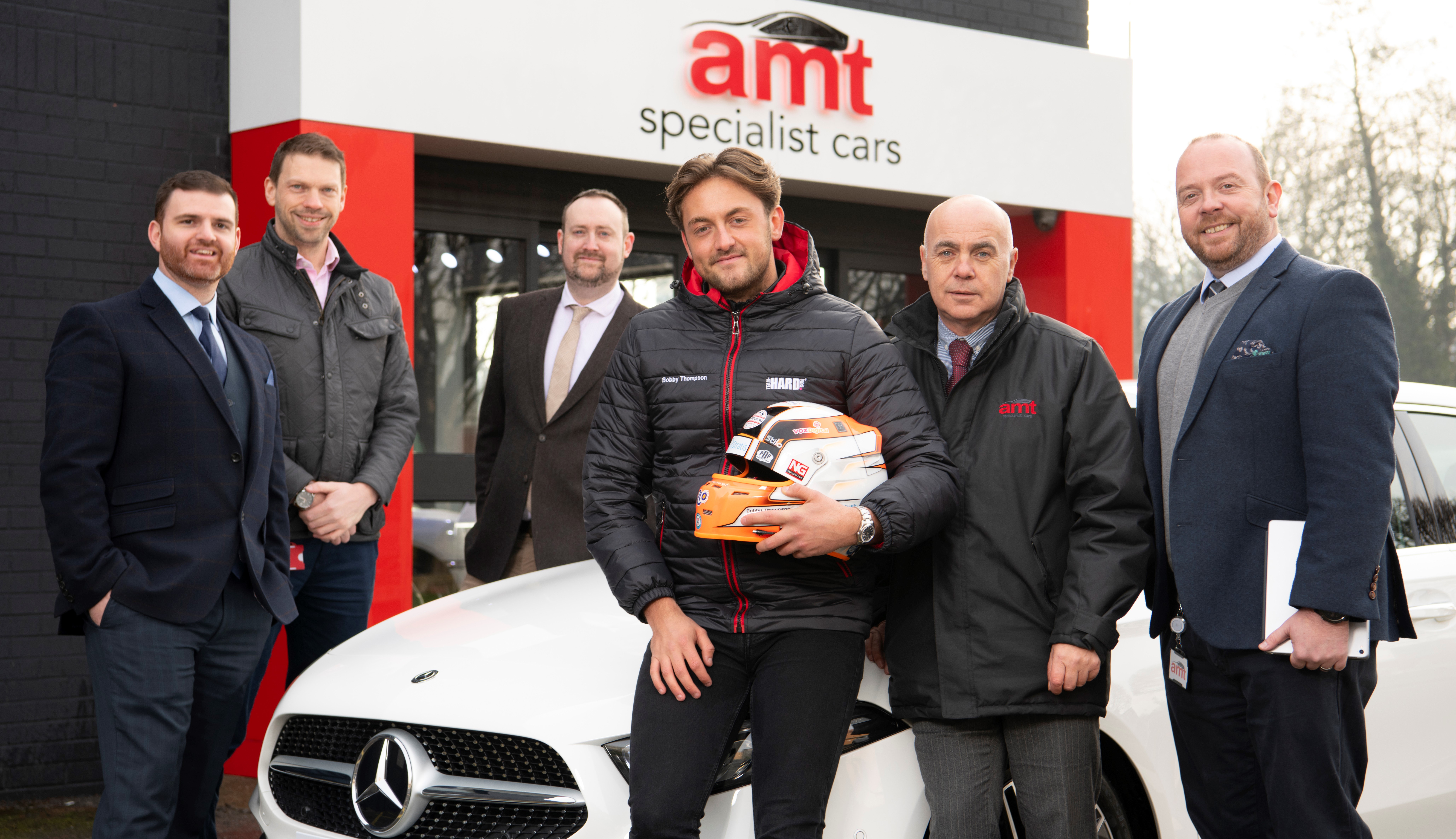 Bobby paid a special visit to AMT’s specialist cars division in Leeds, earlier this year. In addition to signing the sponsorship contract, Bobby had a tour of AMT’s specialist cars showroom where he had the chance to immerse himself in AMT’s extensive luxury cars collection. AMT also gave Bobby his stunning new Mercedes A class which he will use as his personal ride for the 2019 season.

“I’m delighted to be able to welcome the AMT Group into the Kwik Fit MSA British Touring Car Championship as part of the #19 Team,” says Thompson. “AMT are a prestigious brand and they are joining the most prestigious championship in the country. Having them as a crucial part of our team this year will be a major boost as I look for my first BTCC podium finish.

“I was invited up to the AMT Group headquarters to meet the team and I was amazed at the range of vehicles available and the amount of different options they have for their customers,” continued Thompson, who is one of the current crop of BRDC Rising Stars and also works as a fully qualified ARDS Race Instructor. “Everyone likes to drive in style and thanks to AMT I will be driving in style on and off the track.”

Ian Dunn, AMT’s commercial director commented: “On both a business and personal level I’m delighted to be able to partner with Bobby Thompson and Team Hard this season. I’ve been a huge fan of British Touring Cars for years, like many of my colleagues, but this partnership also provides AMT with a great opportunity to reach an audience that is a perfect fit for our business. We look forward to seeing Bobby become an established and successful competitor through the 2019 season.”

Last year, Thompson earned a number of top ten finishes. Bobby says that the 2019 season is the perfect time for AMT group to make their debut as a BTCC sponsor.

“The team have been working tirelessly all winter to make the improvements we all know we need to make,” added Thompson, who finished fifth in last year’s Dunlop Forever Forward standings. “We have already conducted the first full shakedown of our VW CC at Brands Hatch and I could instantly feel a major difference in the car and I’m confident that I can challenge for regular top ten finishes and more this year. I have been with Team HARD for four years now and we have never been better prepared than we are now to cause a real stir.”

Bobby Thompson is a 22-year-old professional racing driver who is also qualified as a professional driver coach, working with motor manufacturers and established racing teams to help aspiring future racing drivers improve on their driving techniques, data analysis and driving skills. He has been racing since the age of nine and is the 2017 VW Cup Series Champion. Keep up to date with Bobby’s progress on Facebook, Twitter, Instagram and his official website.

Team Hard came into existence in early 2012 due to the high interest and demand in race days and corporate activities being organised and operated by former British Touring Car Championship driver, Tony Gilham. Tony Gilham has been involved in British motorsport every year since 2005.

In addition to their expanding race team, Team HARD currently manages and assists with the careers of more than 20 aspiring professional racing drivers and claimed championship honours in the prestigious British GT4 championship in 2016 prior to Thompson’s emphatic title-winning campaign in the VW Cup Championship the following year.

The BTCC is the UK’s longest running motorsport championship and the third longest continual running race series in the world behind the Formula One World Championship and NASCAR Cup Series. Held over ten weekends at Britain’s most popular race circuits, each one of the 30 races that make up the season is screened LIVE on ITV 4 with extensive highlights packages shown in more than 20 different countries, including the United States.