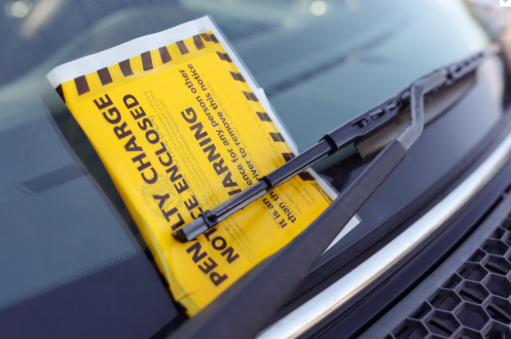 We’ve all been inpatient behind the wheel at times – perhaps it’s because you’re running late to work, or because you’re just having a bad day. But what about when the car is parked? Whether you’ve intentionally ignored a pay and display stand or missed crucial road markings, we know it’s never ideal getting a parking ticket.

Although parking tickets are less severe than having your car impounded or being involved in a collision, it’s still a major inconvenience that most drivers seek to appeal. At AMT, we took a look at the number of PCNs issued, appealed and successfully waivered, to reveal which cities are the most and least forgiving when it comes to parking fines.

Which is the worst city for parking tickets?

Of the locations analysed, London was the worst area for issuing parking tickets, with a staggering 3.7 million circulated over twelve months. Camden issued twice as many tickets as most entire cities did alone, accounting for 126,795 higher-level PCNs and 69,004 lower-level parking notices alone. Comparatively, the City of London issued almost three times less, with 46,348 higher and lower-level tickets issued over the same period. Manchester was also a top city for unruly parking, with 598,060 PCNs issued, followed by Edinburgh at 208,523 tickets.

Norwich issued the fewest PCNs over the year with 26,530, followed by Sheffield with 47,168 and Cardiff with 66,621. Based on the number of PCNs issued over a year as reported by each council, the top five worst areas for parking tickets are:

Issuing parking tickets is one thing, with a recent study also revealing that Saturday is the day where drivers are most likely to receive a ticket and that Sunday was the safest, but what about appeals? If a city distributes more parking tickets but the majority of them are then revoked on appeal, then it’s probably the safest place to park.

Which is the best city for appeals?

Although London is the area with the highest number of parking tickets issued due to its size, our research reveals that it’s one of the best places for making appeals. Out of the 25,275 PCNs appealed, an impressive 12,348 were appealed successfully – equalling a 49% success rate for wronged drivers. However, it’s Newcastle that’s the best place to get a parking ticket, with a staggering 66% of appeals proving successful.

Norwich is by far the worst city for spurned drivers, with just 9% of appeals proving successful. They’re closely followed by Leicester with a success rate of 19%, and then Manchester with 23%. The final ranking for the three best cities for parking ticket appeals are as follows:

While the top three worst areas for parking ticket appeals are:

The research also reveals that drivers in Edinburgh are least likely to appeal a driving ticket, with just 0.11% of PCNs being disputed, while Leeds drivers are most likely to push back, with 30% of drivers challenging their tickets. 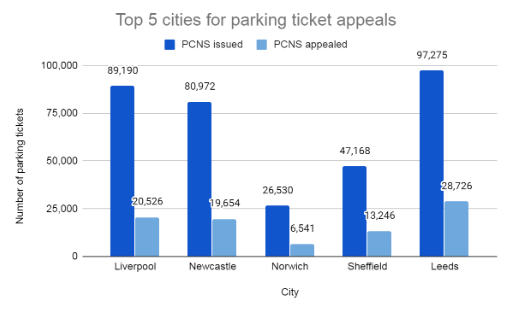 Even then, the cities with the highest numbers of PCNs only motorists contest a marginal amount of tickets issued – proving that most drivers would rather skip the hassle and pay the fine than challenge authorities.

How do I appeal a parking ticket?

It depends on the type of ticket you have, so it’s important to check what it’s labelled as before you start. The most common type of ticket is a Penalty Charge Notice (PCN), which is usually issued by the council on public land such as a high street or council-owned car park. The best way to appeal a PCN is to write to the council – called making an informal appeal. You have two weeks to make an informal appeal from the date of issue, or up to 21 days if you received the ticket in the post.

The more evidence you can include to dispute the claim, the more chance you have of success. Some of the evidence that’s worth including is:

When making an informal appeal, you’ll also need to include the date the ticket was issued, your address, your registration number and the penalty notice number.

If you don’t feel that an informal letter will cut it, you might consider making a formal appeal. This is when you’ll be sent a letter and a form called ‘notice to owner’, and you’ll have 28 days thereafter to make a formal appeal. Even if your appeal is rejected, you’ll still typically get a 50% discount if you pay soon after a verdict is reached. If you don’t appeal and don’t pay within 28 days, the penalty will increase to the full 100%.

At AMT, we’re committed to promoting safe and responsible driving – whether it’s in a luxury Porsche, a fan-favourite Audi A3 or a reliable Toyota. If you’d like any further information on the above research or want to find out more about what we do, just contact our team or take a look at our car leasing services.